Covid-19 scared and slowed us down. But Porta Nuova has restarted, with a “green beach” for urban holidaymakers and the new Milano City Studios.

The Covid-19 pandemic had a huge impact on our lives and habits. Daily activities, which were once trivial, such as walks in the park, physical activities in public spaces or relaxing afternoons in the open air have become extremely difficult and only possible with the adoption of mandatory precautionary measures. 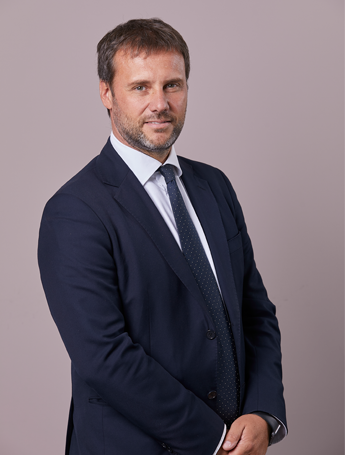 Only a few weeks ago it was possible to move freely outside the house again. Matteo Ravà, Managing Director Asset Management at COIMA, said: "With the end of the lockdown, people have invaded the parks, and not the boutiques in Via Monte Napoleone. People need air, nature and sunshine." Ravà is also responsible for the technical and cultural management of BAM - Biblioteca degli Alberi Milano, together with the Riccardo Catella Foundation and the Municipality of Milan. "The new freedom we are experiencing brings with it an awareness of what we can and cannot do. It requires a strong sense of responsibility in order to defend what we have achieved. We feel responsible for an important mission – allowing everyone to enjoy the city and its public spaces, while guaranteeing a pleasant and safe experience. Porta Nuova is a significant example."

The restart of post-lockdown activities was made possible by adopting measures suggested by health authorities to contain the spread of the virus and guarantee public health. "In all the areas we manage - not only in Porta Nuova - we have adopted a protocol that includes the provision of medical-surgical equipment and information, in buildings’ public and communal areas. A naturally sustainable pedestrianised place like Porta Nuova allowed us to go a step further. We wanted to increase services to enable greater green mobility."

The changes are visible to park visitors. In outdoor areas, new bike stalls have been set up, with information on anti Covid-19 measures, sanitising gel dispensers and continuous sanitisation services for floors, children's playgrounds and communal areas. Safety is the starting point for a series of inclusive initiatives such as Wi-Fi enhancement and the launch of the Porta Nuova Milano app, which is designed to book events and services in the area and ready for the management of the new Lido BAM.

Biblioteca degli Alberi Cultural Director Francesca Colombo said: "During the quarantine, the Riccardo Catella Foundation has been close to the Milanese community and BAM Friends, involving them with a digital cultural programme. Now we are back to welcoming citizens, through safe paths and eco-friendly painted spacing circles, which allow a safe and responsible use of the green areas and new spaces that we opened on Sunday 21 June." 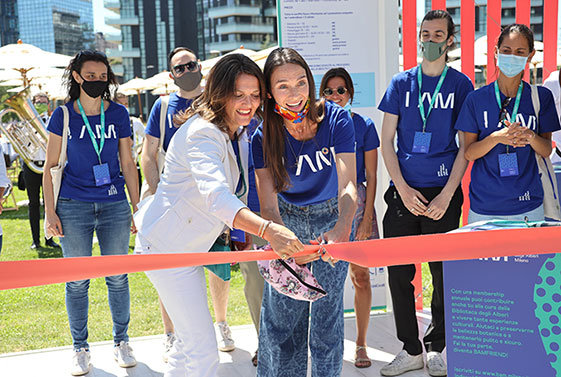 This last surprise that BAM has reserved for the Milanese city dwellers was unveiled during the park’s summer festival. Lido BAM is a “green beach” with deckchairs and umbrellas, which will offer citizens the opportunity to enjoy sun and relax, while being immersed in the park’s botanical heritage following social distancing rules. It will be open until 31 August. "This initiative is a tribute to Milan and the Milanese who in recent months had to give up their open spaces" she said. "We want to give everyone a chance to take back their city and enjoy it safely. That's why we thought to recreate the atmosphere of a lido with two deckchairs in BAM. The deckchairs are bookable for a day or half a day and events will happen around the area. Umbrellas will be moved to keep the grass green, a bit like they do at Wimbledon to protect the court, match after match, to safeguard the project’s green soul.

The  BAM cultural programme for summer 2020 promises to be the best opportunity to return to public spaces, keeping safety as a priority but rediscovering the pleasure of getting together and sharing moments of fun, entertainment and reflection. 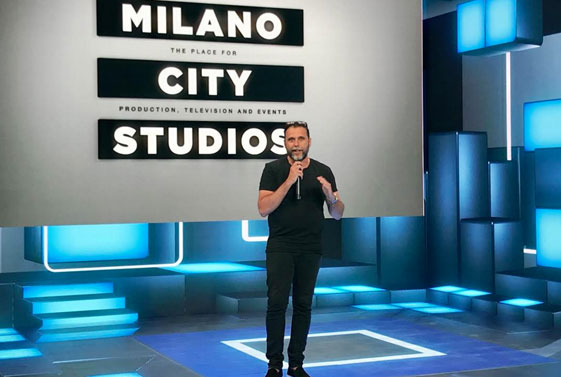 This innovation reaffirms the dynamism of the district and shows it can continuously reinvent itself. For the first time, Milan will have its own production studios for events, digital productions, commercials and TV shoots. Milano City Studios have been launched in Porta Nuova by the venue management company Big Spaces, in partnership with COIMA. More than 20,000 square metres of space, including nine outdoor and eleven indoor locations, three fully equipped hi-tech studios will be available to communication agencies, broadcasters, record labels, production companies and creators of live or digital content.

Is Milan becoming like Los Angeles, London, and New York? "That's right: this is a new model for the Italian content and event production market, which will give new meaning to the iconic Porta Nuova locations through the efforts of professionals, partner investments and the already intense demand from a customer network which has been built over the years." explained Andrea Baccuini, CEO of Big Spaces “Milan is the city of events, finance and meetings. Our benchmark have been the Los Angeles Center Studios , which operated outside the City but moved into the urban environment. With Milano City Studios we want to do the same thing, enhancing a reality which is already rooted in the city, with a strong architectural identity. We expect a great demand thanks to the variety of shooting areas, the adoption of cutting-edge technologies, availability of on-demand services and logistical centrality of the area which is easily accessible from Milan or Malpensa Airport, and a stone's throw from Porta Garibaldi and Milano Centrale stations."

Porta Nuova re-opens. This has been possible thanks to a strict protocol to prevent the spread of the virus, which you can consult below.

The new freedom we are experiencing requires a strong sense of responsibility in order to defend what we have achieved. We feel responsible for an important mission: allowing everyone to enjoy the city and its public spaces, while spaces guaranteeing a pleasant and safe experience. Porta Nuova is a significant example

Milan is the city of events, finance and meetings, we want to enhance a reality which is already rooted in the city, with a strong architectural identity 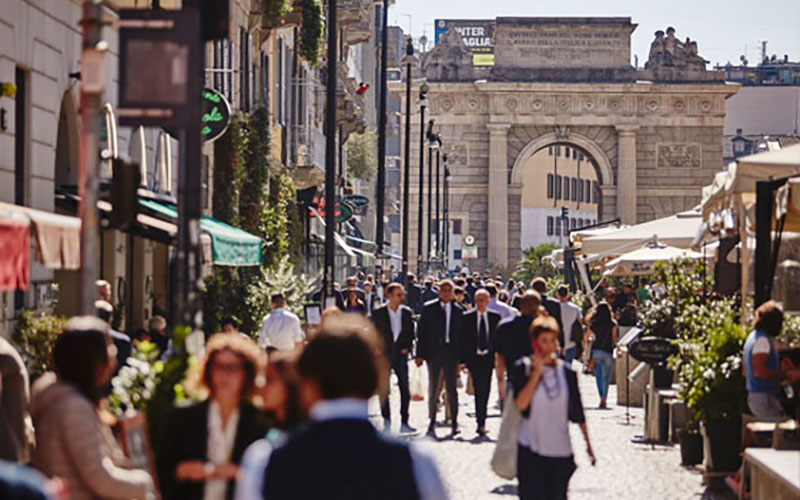 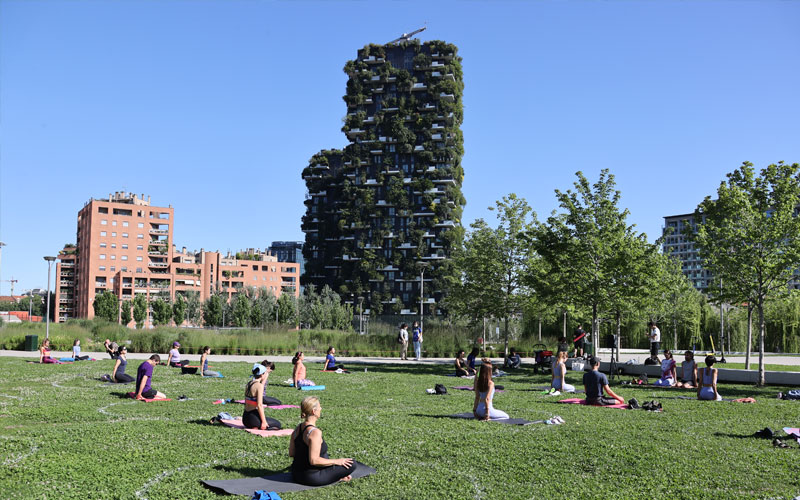 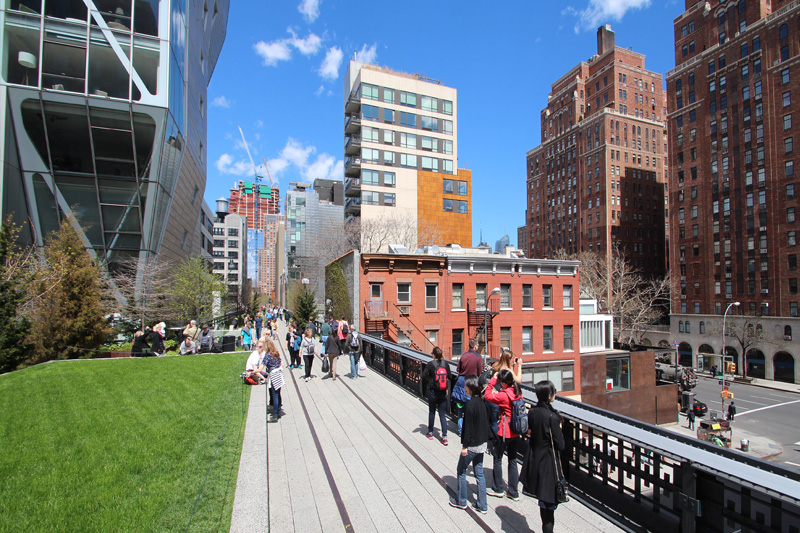