Target AUM of €10 billion in the next three years, strategy based on urban, ESG and digital regeneration. Investments of up to a further €5 billion over the next five years.

Throughout the establishment of a holding company by all the historic shareholders the COIMA Group has been created, bringing together COIMA SGR, an Investment & Asset management company that manages 27 real estate investment funds; COIMA REM, a development and property management company, that has developed and manages over 5 million sqm of property; COIMA HT, a newly established company that operates in the technological and digital field to support the processes of urban regeneration and digital transformation of physical spaces; COIMA Image, active in space planning and interior design; and Residenze Porta Nuova, an agency dedicated to the residential sector.

The establishment of COIMA Holding simplifies the shareholdings of the operating companies, uniting them under the COIMA Group more than 40 years after the establishment of COIMA Srl in 1974, consolidating the historic relationship between all the founding members and marks the launch of the business development plan for the next three years. Over the years, the Group has defined, for each of the subsidiaries, a solid and lasting governance structure in line with the highest international standards, strengthened over time with the growth of independent members and of the number of committees, particularly in terms of risk and sustainability.

The management of the Group, which has been stable and offers significant experience in real estate, was further consolidated with the appointment of new professionals. COIMA now has 219 professionals (+219% since 2015) - of which 44 were appointed in the last 12 months, despite the pandemic - 55% of whom are under 40 years old.

I COIMA funds have consistently outperformed expectations and delivered above-average market returns. In particular, the Porta Nuova Garibaldi fund was awarded best Italian specialised fund in terms of performance for two years in a row by MSCI.

Below shows the performance of the funds that have completed the management cycle with monetization of the return for investors:

In 2020, the Group consolidated shareholders' equity of over €45 million, without any debt. COIMA SGR recorded a capital surplus of 3.7 times the regulatory capital requirements and overall stabilised assets under management of over €8 billion, double the total in 2015, with the aim of reaching €10 billion in the next three years.

Building and urban regeneration, ESG and digital impact are the key elements that make up COIMA's strategy. In the next few years, the Group will operate according to an integrated model based on industrial and financial skills, enhanced by data automation and digitalisation, with an ESG impact approach across the entire value creation chain and across the integration of investment management processes and operations, attributing a key role to its people, sustainability, technology and innovation.

A strong focus on ESG issues has always characterised the Group's work. Winner of the Greenbuild LeadershipAward 2020 at European level for commitment to sustainable real estate development, COIMA has developed and manages 34 LEED® certified buildings - representing approximately 76% of its portfolio and 40% of certified buildings in Milan - totalling 400,000 sqm. This is in addition to 15 properties under development, 10 of which will also receive the WELL® certification. A frontrunner in terms of LEED® certifications in Italy with Unicredit tower, the Group has started the process of certifying Porta Nuova, the first LEED® and WELL® for a Community district in the world. The Group’s portfolio also includes the first Italian WELL® certified office building (Corso Como Place) and the largest NZEB (nearly zero-energy building) tower (Gioia 22). It is also among the first operators in Italy to adopt WiredScore certifications.

COIMA's ESG objectives for the next few years follow the decarbonisation guidelines of the European Union. 100% of the Group's new developments will be already aligned with the 2050 decarbonisation target of 2°C and will be both LEED® and WELL® certified. Furthermore, each new project will be subjected to ESG performance assessment through the proprietary analytical metrics of the COIMA City Lab Charter, identifying specific objectives and measurable ESG parameters through the calculation of a rating that will lead to verification of compliance with these objectives.

In March of this year, COIMA SGR, in application of the European regulation 2019/2088 (SFDR), decided to adopt the "comply" approach when considering the negative effects of its investment decisions on ESG sustainability factors. Currently, 9 out of 27 funds, corresponding to 70% of managed assets, qualify according to article 8, and the Group aims to reach 100% of its programmatic funds qualified according to articles 8 or 9. COIMA ESG City Impact Fund, the first Italian closed-end investment fund with measurable ESG impact objectives, is already qualified according to article 8 and ready to invest in sustainable regeneration of the territory at national level, as it has at the Porta Romana railway yard project in Milan.

One of the evolving parts of COIMA's strategy is based on the digitisation of processes and activities. The Group is investing in the digital transformation of its processes, which will bring tangible benefits in terms of production efficiency, and for the creation of a digital platform to be used in the development of buildings and neighbourhoods.ri.

After two years of development, COIMA Human Technology (HT) was born. COIMA HT aims to support the development of urban spaces and buildings with technological and digital infrastructures to increase the value of assets, improve the level of satisfaction and wellbeing of occupants, and offer of innovative services. The use of technology, combined with a vision of service for the user, allows the creation of personalised experiences with positive effects on the environmental impact of the assets and on aspects of social inclusiveness.

At the forefront of this new technological approach is once again the Porta Nuova area in Milan. Thanks to a partnership with QIA - Qatar Investment Authority - aimed at developing a neighbourhood digital platform, and collaborations with McKinsey and Accenture, Porta Nuova represents the starting point of the digital transformation that COIMA intends to bring to the real estate market. COIMA HT, is planning investments of over €28 million and the deployment of a team of 23 full-time equivalent staff over the coming years,Porta Nuova will represent a pilot project at a national level for analysing and developing data collected from users and visitors, for a smartfruition of spaces, activities and services.

Over the past five years, COIMA has contributed to urban regeneration projects with an economic value of over €3 billion, with investment forecast for up to a further €5 billion over the next five years. There have been nine international architecture competitions involving over 200 multidisciplinary studios, with at least as many to come in the next five years, assigning projects to over 15 studios and initiating mutually beneficial partnerships between professionals from different cultures. In the course of 2021 alone, the Group will announce the award of seven new architecture competitions for as many projects in Milan.

78% of COIMA's portfolio is made up of assets in prime locations. Among the main projects Underway, the Group is active in Milan both with the Porta Romana railway yard, in partnership with Covivio and Prada Holding, and in the Valtellina area within the Scalo Farini, and in the north-eastern district of the city, with Porta Nuova.

These projects reaffirm COIMA's leadership in neighbourhood urban regeneration, that will be able to capitalize on the experience gained with Porta Nuova. Named as the best urban regeneration project in the world at MIPIM 2018, the area represents a sustainable urban laboratory focused on people, community, integration and resilience. Furthermore, BAM - Biblioteca degli Alberi Milano, a pilot project at Porta Nuova in the management of public spaces, acts as a network to foster collaborations with associations and companies, with the aim of involving the community on issues such as climate change, education, diversity and inclusion.

On behalf of leading sovereign wealth funds and institutional investors from Europe, the United States, Canada, Asia, the Middle East and Italy, COIMA focuses its investment program on Regeneration in Italian cities with projects that can contribute, to urban economic development and the creation of new innovative formats in terms of environmental sustainability and social inclusion, particularly at the neighbourhood level.

Over the last five years, COIMA has raised approximately €1.8 billion from primary institutional Investors, mostly direct and discretionary, 66% of which are international. The aim for the next few years is to raise an additional €2 billion on the market.

Following the launch of the COIMA ESG City Impact Fund last July - with an equity target of over €1 billion - COIMA will launch new thematic investment vehicles in the next 18 months that allow it to invest according to its strategic lines:

The Group will also maintain its investment strategy in the logistics sector – an asset class already growing strongly, but which is expected to undergo further growth – and tourism, a key asset for the national economy which, severely hit by the pandemic, is also expected to make a strong recovery in 2022-2023.

Manfredi Catella, COIMA Founder & CEO said: “The decision of our founder shareholders to come together into COIMA Holding establishing the COIMA Group after more than 40 years represents an important milestone in the entrepreneurial and corporate journey we began in 1974to contribute to the enhancement of the Italian territory as a strategic resource for economic development, to enable the impacts outlined by the European Green Deal and to deliver the missions of the national recovery plan approved by the Italian Government. Now it will be crucial to work on projects and on the capacity of our companies to develop mutually beneficial public-private and market partnerships to speedily contribute to the country's ambitions and compete on an international scale.” 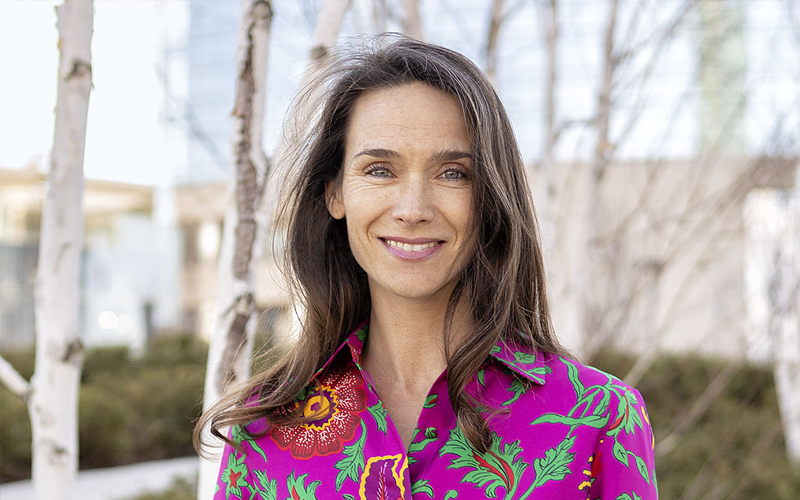 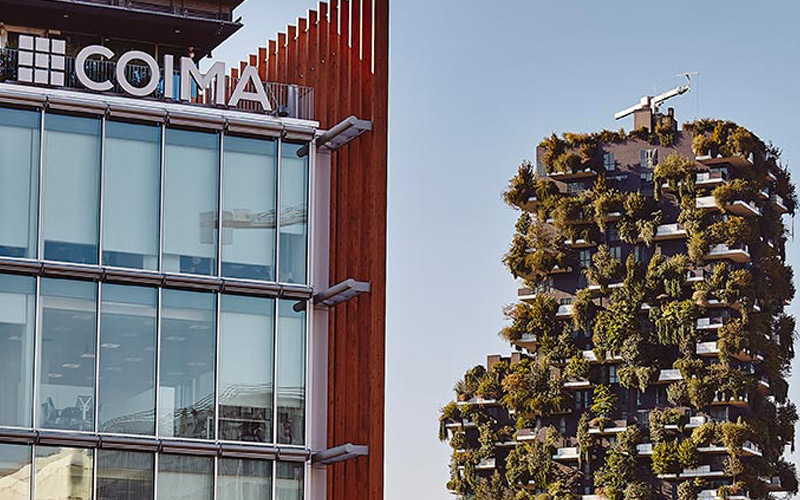 A home for COIMA in Porta Nuova

A home for COIMA in Porta Nuova