COIMA, in collaboration with Apollo Global Management, acquires from Enpam foundation eleven properties in Milan and Rome for more than 300 million euros

Milan, 24 March 2022 - COIMA SGR - leader in the asset management of investment funds on behalf of institutional investors - has reached an agreement with leading Italian and international institutional investors for the acquisition of a portfolio consisting of eleven properties located in Rome and Milan, for over € 300 million, totalling approximately 75,000 square meters.

The properties were previously part of a larger real estate portfolio of the ENPAM Foundation - National Insurance and Assistance Body for Doctors and Dentists. Last year, ENPAM, as part of the general reorganization of its assets, conducted a competitive process resulting in the sale of a portfolio of properties to funds managed by Apollo Global Management. Apollo subsequently entered into agreement for COIMA SGR to acquire approximately one-third of the total awarded portfolio.

The transaction was finalized through vehicles managed by COIMA on behalf of leading long-term Italian and international institutional investors.

The newly established Porta Nuova Liberazione fund, fully subscribed by primary institutional investors, has acquired a part of the portfolio consisting of an entire block made up of mixed-use properties (offices 56%, residential 30%, hotel 9%, car park 5%) in the Milanese district of Porta Nuova, in particular in the quadrilateral between via Viviani, via Bordoni, via Adda and via Cornalia, adjacent to the urban regeneration program of Porta Nuova Gioia promoted by COIMA.

The strategy envisages a progressive program of redevelopment and enhancement of the neighborhood with a long-term investment perspective.

The redevelopment project will focus on sustainability issues, both for the rented residence part with energy improvement projects, and for the office part with the following objectives:

The newly acquired properties will be integrated into the Porta Nuova Gioia urban regeneration program where COIMA is developing seven projects including Pirelli 32, a property recently acquired by a managed fund for a total of over 300,000 square meters and a fully operational value of over 1 billion euros by Generali Real Estate SpA SGR. COIMA has started a collaboration with the Municipality of Milan for the realization of coordinated urbanization works in the area delimited by via Gioia, della Liberazione, Cardano, Bordoni and along via Sassetti and Pirelli with the aim of expand the pedestrian and green areas of the Porta Nuova district. 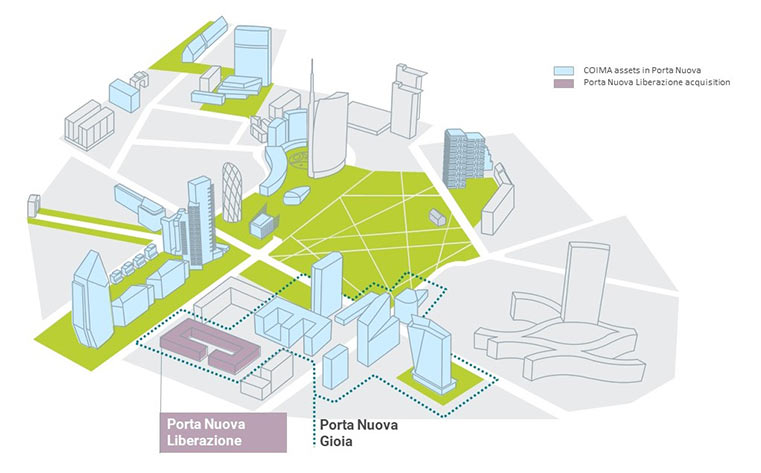 A second portion of the portfolio was taken over by another fund managed by COIMA, invested by leading national investors. This acquisition concerns a property located in via Ripamonti, in the area of the Scalo di Porta Romana in Milan, known for having been the headquarters of the Superintendency of Studies, which will be completely renovated to bring it into line with the highest international standards for office buildings.

In Porta Romana, COIMA is participating together with Covivio and Prada Holding in the urban regeneration operation of the former railway yard which covers an area of approximately 190,000 square meters. COIMA is present in the area with investments of over 1 billion euros which, in addition to the railway yard project, concern buildings in via Ripamonti 85, Lorenzini 4, 8, 10, 12 and viale Isonzo 25. In the via Lorenzini complex, which was the headquarters of the Boehringer Group Ingelheim Italia until the end of 2021, COIMA will start a redevelopment process aimed at developing a new Class A tertiary building. 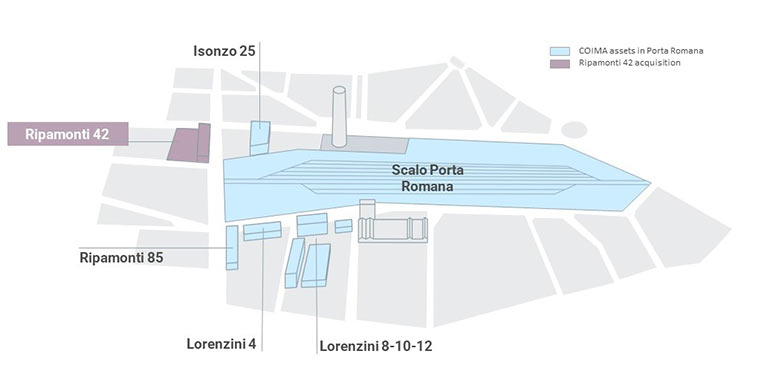 The last part of the portfolio, consisting of two office properties located in the Central Business District of Rome, as well as two properties mainly offices and a hotel in Milan (offices 83%, residential 3%, retail 1%, hotel 13%), was acquired by the newly formed COIMA Thalia Fund, fully subscribed by the Apollo funds. The fund becomes operational with the closing of this operation with an initial value of 60 million euros and a target of over 80 million euros.

The properties of the fund, covering approximately 36,000 square meters, will be subject to a redevelopment that will lead to a significant energy improvement.

The acquisition was financed by Goldman Sachs Bank Europe SE, with TRIMONT REAL ESTATE ADVISORS as agent bank, and by Natixis S.A., with Société Générale as agent bank.

In the transaction, COIMA SGR was supported by Gianni & Origoni for the legal aspects, by Chiomenti and Allen & Overy for the financing. Maisto e Associati supported COIMA for the tax aspects and BIP and Yard Reaas for the due diligence.